This is the charging section and it's responsible for all the info related to discharging.
When the phone is not plugged to the charger all the data will start becoming visible to you, some data like App usage and Wakelocks will need some time to be shown. 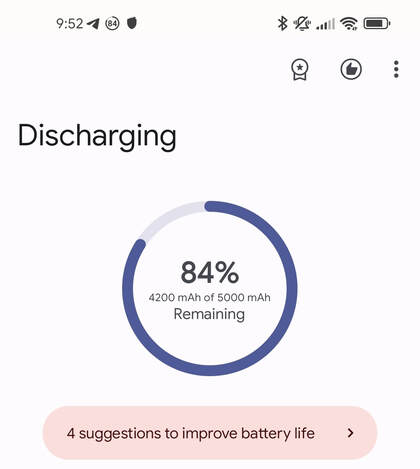 At the top of the section, we have a battery level indicator which represents battery percentage and capacity remaining. The indicator is clickable, clicking on it will bring you to the device's battery info page.

The next feature of the app is suggesting tips to improve battery life. At runtime Battery Guru checks for power-consuming features already enabled on your device and suggests what you should turn off/on to improve your battery life. ​ 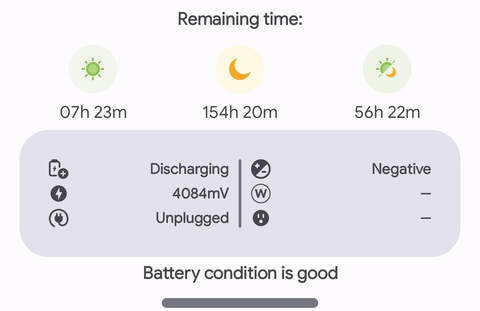 Block below represents some basic battery info and current state of the battery.
On the bottom Battery Guru shows your battery condition based on estimated battery health that can be found in Health Section. 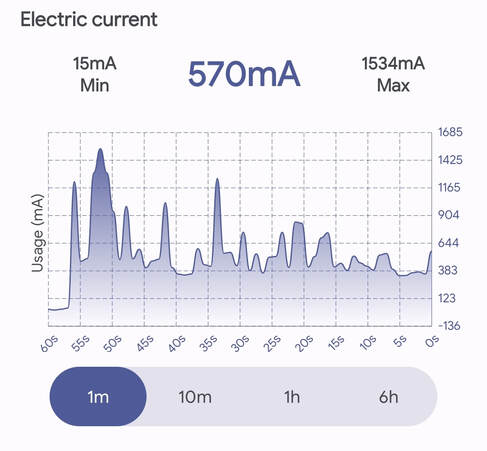 Here we can see how the electric current (unit - mA) behaves from our battery, an electric current is a stream of charged particles, such as electrons or ions, moving through an electrical conductor or space. It is measured as the net rate of flow of electric charge through a surface or into a control volume. The graph represents an electric current over time including the history of the last 1 minute, 10 minutes, 1 hour, and 6 hours.
Higher current result in higher battery usage.
​
On the top of a graph min/current/max values are defined 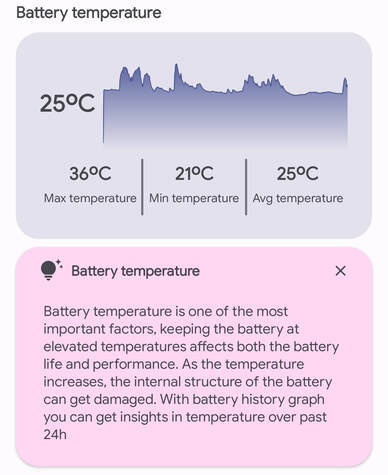 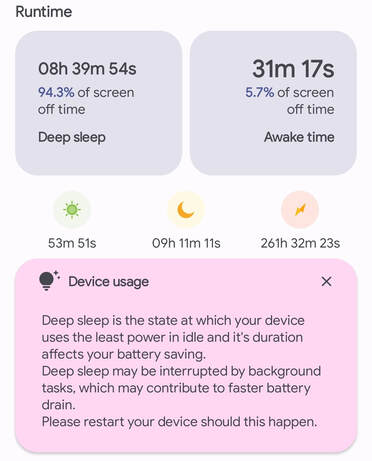 Deep sleep is the state at which your device uses the least power in idle and its duration affects your battery saving. Deep sleep may be interrupted by background tasks, which may contribute to faster battery drain. Please restart your device if this happens. Deep sleep only happens while your screen is off.

Awake time is the time your device is awake while the screen is off. That means that the device wasn't able to go idle and that the battery drain is slightly (depending on the background tasks that cause it) increased 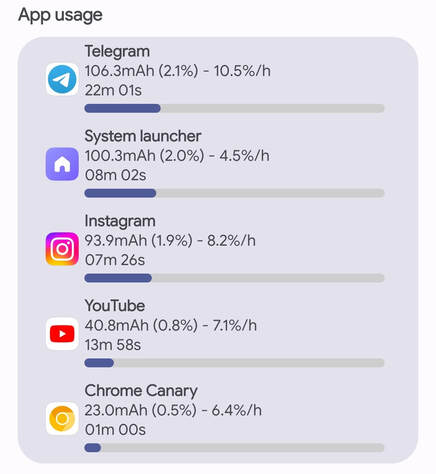 - App usage shows the application usage since the device was removed from a charger. This statistic needs some time to be shown to you, so please be patient. The statistic shows how much of the capacity was drained by each app that was in the foreground. You'll get insights into how much percentage of your battery was spent as well, and how much will do per hour if you continue to use the apps in the same way you do.
Battery Guru calculates the per-app battery usage a bit differently than Android and many other apps so you won't get exactly the same statistics if you compare any of those. Instead, Battery Guru uses its unique way of calculating the stats based on the battery capacity you have an electric current used at the time the app was active. 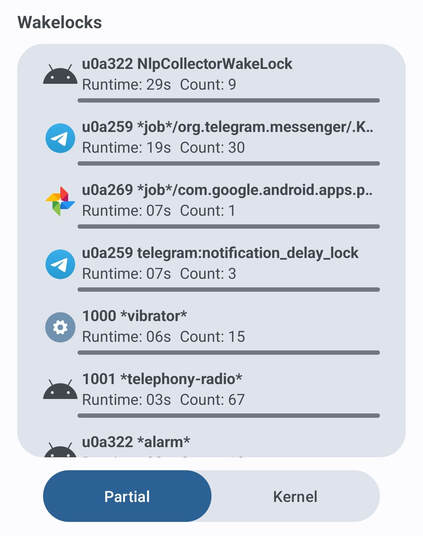 - Wakelocks are power-managing software mechanisms, which make sure that your Android device doesn't go into a deep sleep (which is the state that you should strive for) because a given app needs to use your system resources.
Have you ever gone to bed with your phone's battery well over 50% and woken up to find out that it has depleted overnight and the device has switched itself off? There are several causes for this abnormal behavior, and among the biggest culprits are the unwanted system wakelocks.
There are several types of wakelocks, BatteryGuru will only get the most important ones:

Partial wakelocks are wakelocks from apps. These can be reduced by uninstalling or disabling features in software. If you find any of them running for so long, this means a partial wake lock becomes stuck because it is held for a long time while your app is running in the background (no part of your app is visible to the user).
This condition drains the device's battery because it prevents the device from entering lower power states (defines also as awake time). You can find more info for each by pressing on them and doing a Google search, there will be surely some info as you are not the only one who suffers from the high amount of wakelocks.

Kernel wakelocks are low-level/hardware wakelocks from the kernel. We can only reduce these by modifying the kernel or reducing the usage of a certain feature of the kernel. By researching these we can improve the battery consumption and performance of the Kernel. If you are an advanced user, you can use a custom kernel developed for the model of your device. 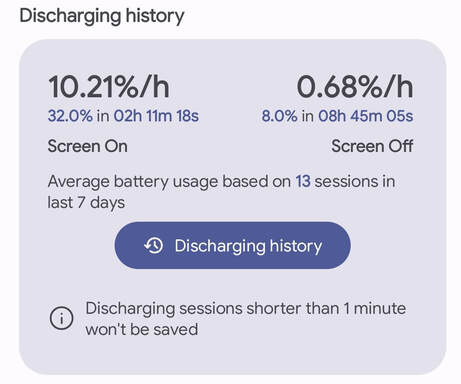 Each card is expandable so simply clicking on it will show a lot of useful info for that session.
FAQ
​App stats are not shown, what to do?
If you are checking the app statistics as soon as you unplugged the device they are likely not gonna be shown. You can expect them to be visible in few minutes.
I cannot see any wakelock, but I'm sure they present, what to do
Because the Android became more and more aggressive after every release in terms of the stats access from the device and logs, we are forced to grant permissions over the ADB or with root. Check permission manager in BatteryGuru for more info.
Paget96 Projects